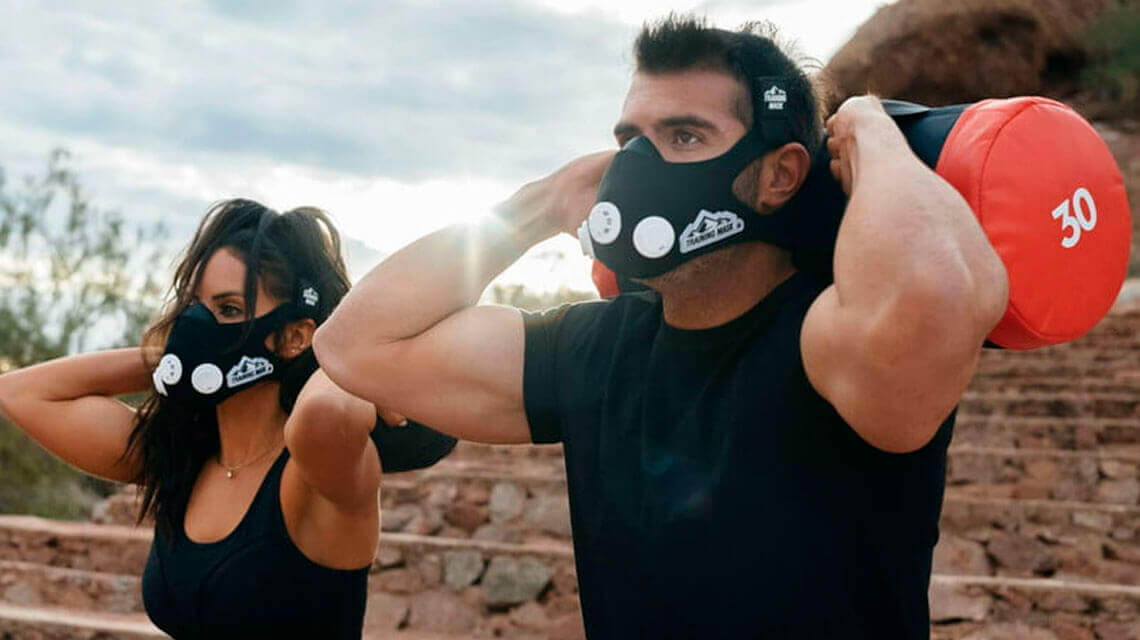 A couple of years ago training masks produced by the American company Training Mask came into vogue. At about the same time, discussions about whether to trust such a high-altitude device began.

Someone argues that training in a mask will spoil your heart. Others claim that thanks to this thing they began to breathe differently. At the same time, it is challenging to find a scientifically based opinion on the Elevation Training Mask today.

What is an Elevation Training Mask?

The Science for Sport reports, the elevation training mask (ETM), also known as an altitude mask or ventilatory training mask, claims to:

The design of the mask restricts the oxygen flow using flux valves that limit the amount of air entering the mask, and therefore, the lungs.

The ETM simulates high-altitude training (between 914m to 5,486m). This concept is based on the fact that some athletes, especially distance runners, train at higher altitudes.

Altitude training is believed to increase your body’s red blood cell count, allegedly giving you a temporary performance boost when you return to sea level.

Science about the ETM

The study conducted by the Journal of Sports Science and Medicine called "Effect of Wearing the Elevation Training Mask on Aerobic Capacity, Lung Function, and Hematological Variables" found the next:

After six weeks of a high-intensity cycle ergometer training program, it was found that both the control group and the mask group significantly improved VO2max and PPO. However, only the mask group had significant improvements in VT, PO at VT, RCT, and PO at RCT from pre to post-testing.

There were no significant differences in lung function parameters or hematological variables in either group.

The ETM: Effects on physiology & performance

However, there were no significant within or between group changes in lung function variables measured. Future studies should evaluate the ETM effect on MVV after training.

Additional studies are needed to determine the exact resistance that the ETM provides during respiratory muscle training as well as if improvements in VT, PO at VT, RCT, and PO at RCT translate to improved performance in athletes.

On the other hand, UPMC reports that other studies haven’t found any benefits from wearing training masks.

In a study published in the Journal of Strength and Conditioning Research showed that wearing an elevation training mask while lifting weights was associated with decreased alertness and a lower ability to focus on the task.

The only thing is clear is that ETM might help you breathe more efficiently. But hardly that might improve athletic performance.

If you just want to buy this device in order to breath "correctly" keep in mind that wearing such a mask might cause you to hyperventilate or even faint, due to its restrictive breathing.

In addition, people who have high blood pressure or other cardiovascular problems should avoid using training masks.

First of all, we train to improve our health. In its turn training mask is purposed to bring additional benefits to our bodies. So, as we know from the childhood, we should consult a doctor about things concerned to our health. In this case before taking up a new training regimen or using modern equipment.

That's why we turned to an interview given by sports doctor, specialist of the Reaclinic and Triathlon athlete Natalia Labzova to 4MMA.

"First of all, the buyer must know the pathologies that he already has and relate them to the risks that arise when using a mask," she said. "If a person has any pathology - he should consult with his treating physician. First of all, it concerns people who have problems with the respiratory and cardiovascular systems. But, in general, if you plan to use the mask for a long time - the instruction strongly recommends undergoing a preliminary medical examination."

According to the doctor, it will be easier for muscles to work in conditions of a lower amount of oxygen, which is very good for their functionality.

"If we talk about such sports as running, cycling or skiing, then there will be an increase in endurance (in simple terms, running and pedaling will be easier). As for martial arts, it is more likely to have less muscle acidification during the fight."

Labzova also admits that the manual given to the mask has some precautions about types of exercise while wearing this device. There are no movements in the dynamics. There is only static.

"If you do not have any original pathology, then it may be a syncope, an abnormal heart rhythm, brain hypoxia. If you exercise correctly with pathology, especially the cardiovascular or respiratory system, the consequences can be very serious - even death."

"By the way, there is a good example: people with asthma will be at risk here. At the same time, with proper use of the mask, they can even feel better."

The main think of her speech is that you shouldn't trust everything said in the advertisement. "If we are talking about top-level athletes who are ready for short intensive work in the hypoxia mode and are under medical supervision, then there are no questions."

"In general, this is more part of the advertising campaign, which many people perceive as a guide to action. There is a huge difference between amateur and professional workouts, for some such training will cause progress, for others - damage to health."

Finally, even though you can upgrade your overall look at the gym with this mask, even though a larger number of elite and non-elite athletes have started to use the Elevation Training Mask to try and gain a competitive edge, it is vital that they understand the science behind the technology and whether or not they have actually been shown to work before using and marketing these products themselves.

Waiting for more research and perhaps once this mask will be recommended to everybody willing to improve their breathing.