Kinesio Taping: is there magic behind colorful tapes? 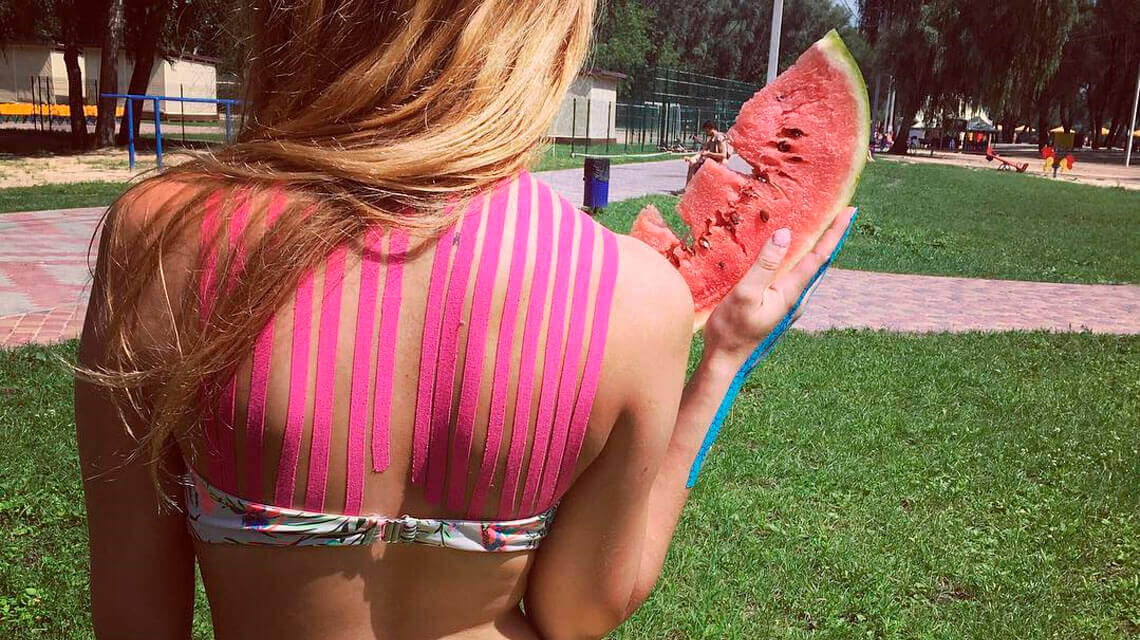 From ancient times, colorful items and decoration of your own body were something that always attracted people. Unlike tattooing now popular Kinesio Tapes can be easily removed from your body. Moreover, it's reported curing capabilities are raising hype around colorful stripes.

It's a trend nowadays to decorate different parts of your body like biceps, glutes, and others while doing sports or just photo shooting.

Here we'll have a look through some evidence to get to know if there is any magic behind this trend.

What is Kinesio Tape?

Special cotton tapes that do not contain latex, with an acrylic thermoactive coating, similar in elasticity to human skin, which are superimposed by the method of Kinesiological Taping. Tapes are designed to ensure adequate muscle work, the flow of cyanogenetic processes, reduction of the pain effect, while not limiting movements, improving blood and lymph flow, possessing hypoallergenic properties, and complete air and moisture permeability. Can be used for five days, 24 hours a day, even in water.

The method of Kinesio Taping covers the use of tapes not only in cases of dysfunction of the musculoskeletal system, but it is also used for visceral, neurological, and microcirculatory changes. The main feature of Kinesio Taping is therapy, not aimed at limiting movement, but at increasing it, properly applied tape application does not restrain movement, and in some cases, according to the inventor, even increases their performance. The structure of the patch allows you to use it for several days, not only in dry conditions but also in water.

The developer of the method states the following main mechanisms of the effect of the tap on the human body:

It is believed that the basis of the mechanism of Kinesio Taping is the creation of favorable conditions for cyanogenetic processes, which are realized in the normalization of microcirculation in the connective tissue of the skin and subcutaneous fat, reducing the pain syndrome, restoring afferent impulses at the segmental level.

Kinesio Taping is advisable to use as an independent method, as well as in combination with drug treatment, physiotherapy, manual therapy, and physical therapy in the following situations:

In modern literature, there are allegations that the kinesiological tape has an anesthetic, anti-edema effect and an effect of increasing free movement volume, although the exact mechanisms and nature of the effects of taping remain unknown. Currently, there are three main hypotheses of tape effectiveness: sensory (based on the Melzak-Wall nociceptive theory), vascular (involves the formation of tissue “pump” at the expense of areas with different interstitial pressure), and muscle (muscle activation due to the mechanical effect on the tonic reflex).

However, the published results of qualitative studies conducted by the Australian Physiotherapy Association and Sports Performance Research Institute New Zealand do not confirm any of these hypotheses and indicate the clinical ineffectiveness of the method.

In the period from 2008 to 2013, 275 potentially relevant studies were conducted in this area, only 12 of which were found to meet all the necessary criteria for the inherent research of this kind. The remaining studies were either of too low quality, or their data was falsified.

12 studies covered the results obtained from 495 patients (an average of 41 participants per experiment).

The conclusions were disappointing for Kinesio lovers:

A systematic review of research in this area was investigated by the Australian Physiotherapy Association and published in 2014 by the Journal of Physiotherapy. This scientific review is the latest and most complete in the search for evidence of the effectiveness of taping for the musculoskeletal system.

Another research from the Department of Rehabilitation Sciences states the next: "The results showed that KinTape did not facilitate muscle performance in generating higher peak torque, yielding a greater total work, or inducing an earlier onset of peak torque. These findings suggest that previously reported muscle facilitatory effects using KinTape might be attributed to placebo effects."

Dr. Phil Newton, a physiotherapist at the National Sports Center of Great Britain in Lilleshall, says: “This is a multi-million dollar business with no scientific evidence of efficiency. The main idea in their application is fascial muscle unloading - that is, reducing pressure in the subcutaneous tissues. Considering the tensile strength of Kinesio tapes, I do not quite understand: how can they help in practice, except, perhaps, the power of persuasion. The power of the placebo effect is really great and should not be underestimated. ”

John Brewer, a professor at the Bedfordshire University of Sport, states: “In my opinion, this is more a placebo effect. So far, there is not enough scientific evidence to talk about efficacy in the treatment or prevention of injuries. What worries me is that the layer applied to the skin is too small, and it is unlikely that it will be able to provide real support to the muscles, joints, and tendons. They are deep enough, and the strain forces they experience are enormous. But, of course, I don’t see any serious threat in the application of this technique, except that you will lose as far as the hairs of the skin. ”

“I think that if there is any effect, then it is the effect of placebo(!), and probably some effect of psychological pressure on the opponent. When people see athletes using KinTape, they think maybe it will work for them," Nicholas Fletcher, associate professor of orthopedic surgery at Emory University reports.

“Today there is no independent scientific proof of the effectiveness of Kinesio tapes," says Jim Thornton, President of the National Association of Sports Coaches USA. "We call it the headband”(meaning the placebo effect).

Since then, the situation with the evidence base has not changed much. Evidence of the effectiveness of the use of KinTape is fake.

Hope now it's quite clear that these tapes are only a waste of money and time. However, if still your convictions about its effectiveness didn't change or you just want to have some more photo sessions accompanied with bright stripes make sure you aren't the owner of the following contraindications:

In case of sensitive skin, it is recommended to apply a small piece of tape to the surface of the skin to study possible reactions.